The Naivete of Evil

Bernd Ulrich, the main editor for Die Zeit‘s political pages, has written a beautiful essay in the October 7th edition of the paper. Despite my frequent blog posts and twitter and facebook accounts, I am an open Luddite who makes her students hand-write assignments and who has a paper subscription to Die Zeit. I also have an erratic mail carrier, which means that the arrival of my paper can arrive anywhere from three days to three weeks late. Despite seeing the click bait for this essay on twitter, I’m glad to have read this one on paper. The graphic design is quite strong, featuring a long length of barbed wire which ropes its way through the article, dividing the manifesto-like text from other columns and advertisements: 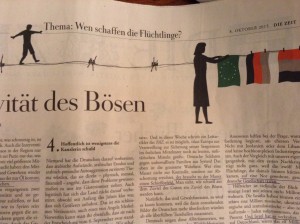 The essay by Ulrich is titled “The Naivete of Evil,” which is a play on Hannah Arendt’s famous subtitle for her book detailing the Eichmann trials in Jerusalem in the 1960s. Written in numbered, thematic sections, Ulrich’s article lays out a comprehensive understanding of the global forces which have led to the refugee crisis in Europe. The conditions of depravity in the Middle East, he asserts, are twenty years in the making – they did not happen overnight. (Americans might also do well to remember that the War on Terror is now almost fifteen years old).   Furthermore, Ulrich identifies a transition amongst Germans on what Demetrios G. Papademetriou, President Emeritus of the Migration Policy Institute, called “the day after” on WEBZ earlier this week. Suddenly, Germans are feeling overwhelmed – and for good reason, given that there are simply not enough doctors, lawyers, teachers and social workers to reach the refugees who need them. Not just traumatized refugees, but also their caregivers, are in shock that events far, far away from them have led to “physical, mental and financial” realities on German soil. The inability to foresee the problem – even though it has been obvious that something like this was brewing – has created a political vacuum. And a vacuum must be filled: in this case, by Horst Seehofer scapegoating the Chancellor and clinging to the dream that a change in course will stop the tide.

Like the Chancellor, Ulrich asserts that this is a fantasy – one among many. Fantasies of fences (which can only function if aggressively enforced); fantasies of military might (Europe, America and now Russia will only inflict damage); and fantasies of being overrun (hold up, says Ulrich, you can’t declare a state of emergency with these numbers) are ever present in the national imagination.  Ulrich even engages with the rich propaganda found at PEGIDA rallies and in Lachmann’s article I analyzed yesterday. “Of course the West is in Danger” reads the title of section 8 – but not because of the refugees. Because of Europeans:

“This, the aggressive nationalism, the exclusion and internal de-liberalization are the tangible threats against the West. Because all of that, unfortunately, is actually present in European genes.”

Ulrich is not actually advancing a genetic argument – that last bit is a metaphor which reads better in German than in my poor translation here. What he’s saying is that nationalism has a European precedent – and it is this nationalism that threatens to undo us.

As for the Middle East, Ulrich says, it would probably be better for all of us if we admitted that our imperial and militaristic strategies have failed. Knowing our limits is the first step towards moving beyond them (Ulrich citing here a quote by Baruch de Spinoza he freely adapted).

Admitting that there are limits seems like a particularly difficult pill for politics to swallow. Fortification is not a way to acknowledge limits – it is rather a desire to construct those limits on terms that are self-directed and seen as politically beneficial. If we follow Ulrich’s line of reasoning, however, limits are given to us by the situation itself rather than by our own imagination, which is why attempts to defend the Vaterland through nationalistic means or to stop the flow of refugees simply because we feel overwhelmed misses the mark.