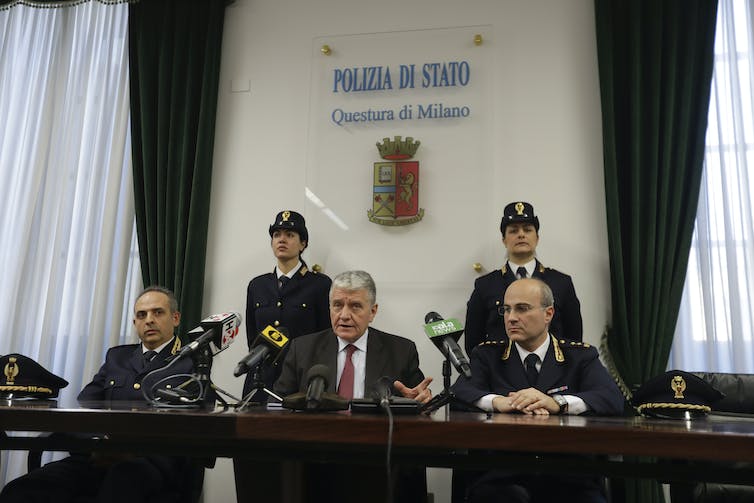 Italian police at a press conference after Berlin attacker was killed in Italy.
AP Photo/Luca Bruno

Germany is recovering from one of the most deadly terrorist attacks since the 1980 bombing at Munich’s Oktoberfest.

On Dec. 19, 12 people were killed when Anis Amri, a Tunisian citizen who had claimed allegiance to the Islamic State, killed a Polish truck driver and then drove his truck into a Christmas market in Berlin. Three days later, Italian police discovered Amri during a routine police search. When he was asked for identification he opened fire, and was killed by police.

In an age where radical Islamic terrorism is seen as a global threat, every attack can be used to make political arguments. As an American scholar of German studies with a focus on the political attention given to Muslim populations, I believe that the impact of the attack in Berlin will be felt in two political arenas. One is domestic: How will this most recent act of terror from a criminal asylum-seeker affect Chancellor Angela Merkel’s reelection campaign? The other is international: In the context of a divided Europe, how will Merkel’s European partners react?

Merkel’s decision to open the borders in September 2015 to refugees trying to reach Germany has been both praised as a humanitarian gesture and widely criticized, even within her own party. Many on the right see refugee resettlement as a threat to German identity and security.

In the week after the Berlin attack, however, the Frankfurt General Newspaper published the results of a voter survey conducted by the Forsa Institute, a prominent polling firm. A majority of the Germans polled (68 percent) saw no relationship between Merkel’s refugee politics and the attack in Berlin. Seventy-six percent of those surveyed did believe, however, that terrorism and security would play a large role in this year’s upcoming federal elections, as Merkel is seeking a fourth term.

The far-right Alternative for Germany party lost no time pointing fingers at Merkel just minutes after the attack. Markus Pretzell, a representative of the group in the European Parliament, tweeted that the victims killed were “Merkel’s dead!”

Horst Seehofer, the head of the Christian Social Union in the province of Bavaria, struck a more tactful tone. Seehofer declared that “we owe it to the victims, to those affected and to the entire population to rethink and adjust our entire immigration and security policy.” Seehofer was quickly reprimanded for using a national tragedy to politicize Merkel’s decision in an op-ed from Peter Dausend in the weekly newspaper Die Zeit.

What effect will this event have on German politics? Various commentators suggest that most Germans are resistant to political panic. An article from Der Spiegel, published two days after the attack and widely circulated on social media, compared German, French and American responses to terrorist attacks. Americans, the authors argued, rebel against terror. The French remind themselves of their republicanism by singing the Marseillaise especially loudly. Berliners? They react as they always do: by showing themselves to be “completely unfazed.”

The same poll asked Germans if a debate about security would serve Merkel well in the coming elections. Only 17 percent said yes. And yet, it is in times of insecurity and uncertainty that Merkel appears most poised and most committed to both liberal democracy and a united Europe.

After the perpetrator of the Christmas attacks was caught, Merkel gave a five-minute press conference during which she thanked the Italian police and criminal justice system. She wished a speedy recovery to the Italian police officer who was shot by the terrorist. Finally, she also thanked all of the international partners who continue to work together and who helped bring the attacker to justice.

“Terrorism challenges all of us,” Merkel said. She added, “We feel the global solidarity of our friends across the world and you should know how deeply we also mourn your victims.” She reassured Italians and Poles that Germans mourn the life of the Italian woman killed in the attacks, as well as the life of the Polish truck driver. These statements were carefully crafted to position Germany as part of the European Union and as both dependent on and confident in European cooperation.

Not everyone shares Merkel’s vision of a united Europe. Challenges to the EU come from parties and politicians to Merkel’s right who position themselves against the European Union, such as the Alternative for Germany party. European politicians can also be quick to criticize the Schengen Agreement, which permits free movement across internal European borders, as insecure.

Various political camps in France have criticized Merkel’s decision to open the borders in light of the most recent attack. French Republican candidate for president Francois Fillon, for instance, reproached Merkel for having underestimated the threat of radical Islamists. This reproach – echoed by far-right leaders in France’s National Front – may be a way of deflecting embarrassment that Amri traveled through France without detection on his way to Italy.

Like most heads of state, Merkel gave a short televised New Year’s address on Dec. 31. She declared Islamic terrorism to be the most difficult test of contemporary society. But she also criticized the efforts of the far right across Europe to undermine liberal democracy. Questioning achievements like a united Europe or parliamentary democracy, as the far right does, creates “distorted images,” she said.

She called on Germans to strengthen democracy, admonishing those who believe that a “prosperous future” could ever be found in going it alone as a nation: “Where…Europe is challenged as a whole, Europe must also find answers as a whole – irrespective of how tedious and tough it is.”