The team from the Center for Political Beauty has posted pictures to their Facebook site showing a successfully installed rescue platform in the Mediterranean. 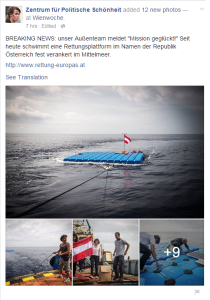 October 3rd is a national holiday in Germany celebrating the reunification between the Federal Republic (West) and the German Democratic Republic (East) in 1990. Today marks the 25th anniversary of reunification.

Germans celebrate today by watching documentaries about divided Germany, visiting concerts and listening to speeches held around the Brandenburg Gate in Berlin. According to Berlin Police, there are so many people out to celebrate that the S-Bahn has stopped letting people out at the Brandenburger Tor stop. At the same time, there are also demonstrations taking place between right-wingers and anti-fascists around the Berlin central train station. The numbers, as reported by the Berliner Zeitung, are not large – a little over 200 right now.

As Germans celebrate the “silver wedding anniversary” (BZ) of their reunification, the country is embroiled in a political debate about refugees, distribution through a European quota system, and rapid legal changes to adjust to the nearly 800,000 refugees Germany expects to receive this year. Joachim Gauck made headlines today for stating that the refugee crisis is an even bigger challenge that reunification. The CDU finance minister, Markus Söder (Bavaria) has apparently stated an even more foundational change to German law: he questions, according to Der Tagesspiegel, whether Germany should continue to offer asylum as a basic right (Grundrecht) in its Basic Law. This basic right, lest we forget, was enshrined in the (initially West German) Basic Law because of the horrors of Nazi persecution and their irresponsible mass movement of people against their will.

There are two historical moments worthy of remembering in face of the two political conversations happening simultaneously today: the massive amount of displaced persons (Heimatvertriebene) who flooded into (a much smaller) Germany after World War II, and the constant stream of refugees fleeing East Germany before the Berlin Wall was constructed in 1961.

Rather than reacting with alarm, as most of the CDU/CSU has done, Germany could see itself as a master of refugee incorporation. Close to every twenty years, another wave of refugees has sought safety on Germany territory and incorporated themselves into German social and political life (1945, 1961, 1989, 2015), and the republic still stands.